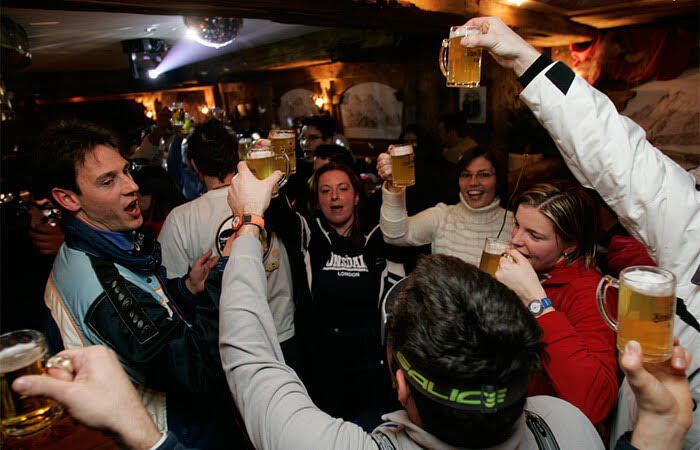 Skiers and boarders are known to be creatures of habit. This goes for resorts, for gear, for bars and – interestingly – for aprés music. In the universe of the aprés ski music the traditional party songs tend to become even more traditional with every passing year making pow pumping mountain lovers shake their butt year after year after year.
But what is it exactly that gets us up to dance on the tables? Which are the mysterious ingredients to the aprés ski cocktail that make us lean back and shout from the top of our lungs? Let’s dig deeper into some of the real classic tunes.
I’m Gonna Be (500 miles) – Released in the 80’s by the Scottish twin brothers Charlie and Craig Reid this boot shaker keeps on enchanting skiers every time a band plays it. The recipe is simple: A catchy tune, a participatory “call and response” chorus that even the most tone deaf powder hound can scream along to and, most importantly, a thick, exotic accent for everyone to try an imitate. Boom!
American Pie – The Don McClean classic released in ’71 has become so deeply rooted in the hearts of the planet’s piste ripping citizens  that it makes one feel home wherever you are. Tip of the day: Is the aprés ski not taking off in the manner you had planned for? Try shouting the four magic words: “Bye bye Miss American Pie” It usually does the trick!
Sweet Caroline – At the time of its release in 1969 Neil Diamond probably did not anticipate his song about John F. Kennedy’s daughter Caroline would make the top 10 on the US Billboard charts. Let alone that it would become an absolute aprés ski behemoth. With its catchy melody and playful words it invites everyone to become a singer for the night. To be honest, who says no to all little bit of “Oh Oh Oh?
Let’s face it: the aprés ski would be nothing without its songs, played and performed in ski bars all over our snowy globe. Loved for their ability of bringing people together. May them forever be heard behind the door of your favorite mountain bar, before you push the door, order a good beer, wrap an arm around a friend and join the fun. All aboard for snow solidarity and shared ski happiness. So good, so good, so good!