A new giant in Austria 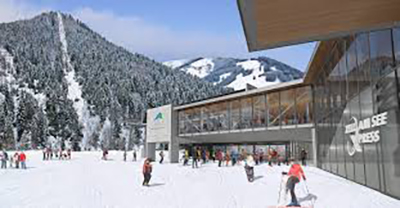 By the time that the Winter of 2019/2020 arrives Austria will have a new ski resort giant. With the completion of the K-onnection lift, and the zellamseeXpress the region is officially the largest ski area in Austria offering 408 km of slopes and 121 lifts. So what does this mean practically? Let’s have a look how the skiers and snowboarders in Zell am See-Kaprun are affected.

Every Kitzsteinhorn skier knows how much a pain in the backside the transport to and from the glacier can be. Firstly, the transport from Kaprun and, in particular, Zell am See takes quite some time. Precious time that you could be spending already on the ski lift getting up the mountain. Secondly, in case you were planing on leaving with the last ski lift, after all you only have so many ski days per year so it’s natural to want to maximize your stay on the mountain) you might as well forget taking the bus. Why? Because the bus you planned on taking, and the next one and the one after that will be rammed with people. All in all the K-onnection ski lift from Kaprun to Kitzsteinhorn. weighing in at a mindblowing 80 million € investment, will shorten your time to get up the slopes and it will allow you to ski until the last lift without putting your planned aprés ski party at OFF PISTE BAR in the town center at risk.

When the first part of the zellamseeXpress ski lift was completed in 2017/2018 skiers on the Schmittenhöhe got a pretty good hint at what was in for them with the piste number 21, a red slope with a solid angle to it and a respectable 800 meters of vertical drop to it. However, with the completion of the second ski lift reaching all the way down to the valley Viehofen, skiers from Zell am See will have direct access to a proper piste skiing paradise: Saalbach-Hinterglemm. Skiers coming down from the Schmittenhöhe to Viehofen can easily transport themselves to the Schattberg Xpress and instantly access some of the most exciting pistes in the area. The 25 million € construction of the zellamseeXpress will sure pay off to the shredders and rippers in Zell am See-Kaprun. Perhaps it is about time OFF PISTE BAR opened up in the Saalbach-Hinterglemm ski area as well?